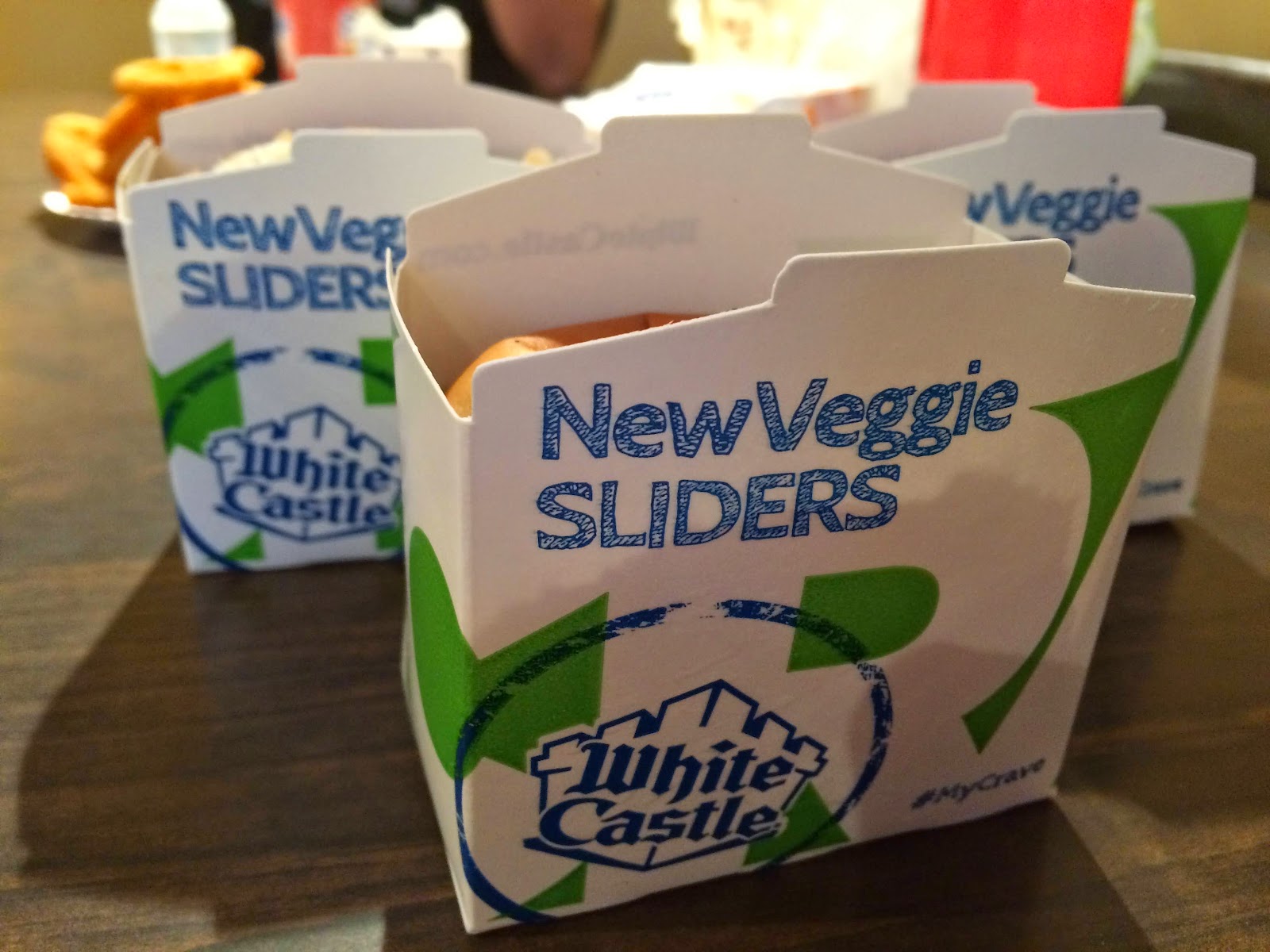 Once, during a night of heavy drinking, I ate a bunch of White Castle "chicken rings" thinking they were the world's most awful-tasting onion rings. The fact that I could confuse chicken with onions indicates all that needs to be said about my expectations about fast food taste and quality. With the exception of that night and the occasional Subway or Wawa sub, I haven't eaten a proper, greasy fast food meal in more than a decade. But recently, as the photo and title suggest, I found myself looking forward to ordering dinner at a +White Castle.
Although I'll eat locally killed and butchered meat, I do so rarely enough that it's easier (for conversations sake) to tell people I'm a vegetarian. My father likes to tease me about this faux-vegetarianism, so when he saw the advertisement for the New Veggie Sliders from White Castle, he sent me the link with the title "Yuck." I tend not to be too obnoxious about meat, compared with other faux-vegetarians go, but I can be very defensive about veggie burgers and other meat substitutes. There is literally no flavor difference between the seasonally-available and much beloved McRib and the fake meat BBQ ribs you can buy at any grocery store year round. Don't tell me veggie burgers are gross as you choke down the flavored sawdust McDonalds passes off as meat.
But that's not my point.

White Castle was debuting this fast food innovation the day before I was to return to Jersey for a New Year's visit. Clearly fate fate wanted me to try these burgers.
The prospect of being able to get an inexpensive fast food veggie burger was oddly enticing, given that there are no White Castles where I live, and, if Im in Jersey, there's so much superior food to be had that burning calories that could be spent on pizza or bagels seemed pointless. That said, there still is something appealing about knowing I can get something hot, filling and inexpensive at 4 a.m. without having to sit in a diner. Plus, I had to know if they were any good at all. They were fine.

I wouldn't call them objectively good any more than anyone would claim that any fast food burger was objectively good, but the veggie sliders are the best tasting things on the menu if you're not stoned. That is, they taste the most like their non-fast food counterparts.
White Castle burgers are distinctive in that no one would confuse a White Castle burger with a proper hamburger. A White Castle veggie burger tastes like an oily version of what you might make at home the first time you try an make veggie burgers. Again, for mass produced food, they were pretty flavorful.
At my wife's insistence I ordered three—one for each listed sauce. If you care about the sauce, order extra because there isn't enough on the burger to really get a sense of the taste. At the risk of losing my citizenship, "Ranch" is gross in all circumstances, so thankfully I couldn't really taste it on the burger. The thai chili sauce was meh. The honey mustard sauce was the most complementary and also the most flavorful.
Mostly, though, it's fine plane. Frankly, if I didn't have my dining preferences set to "gluttonous," one burger would have been sufficient. Two would have been plenty. Three, especially given that I was eating at least my share of the communal fries and onion rings, were too many. But it did give me the opportunity to experiment. Better than any of the sauces was tearing a burger in half and dipping it in the onion ring sauce. This helped kill the taste of the roll while leaving the veggie burger flavors somewhat intact. But if you're on the road and hungry, for the buck or two it'll cost you, you definitely can't do better.
Email Post
Labels: fast food McRib veggie burgers white castle
Location: 987 U.S. 9, Parlin, NJ 08859, USA