Gods, stand up for bastards! 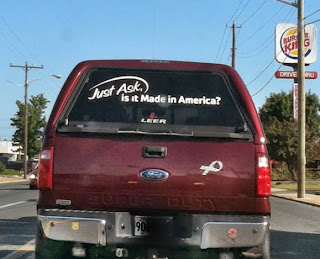 I live in the south and know plenty of normal, functional people with accents who drive pickup trucks, just as I had plenty of normal Italian friends in New Jersey who drove IROC-Zs in the 80s. But I have a special dislike for large pickup trucks mostly because they have actively cultivated a reputation for being the douchebag's vehicle of choice.
I didn't create the stereotype, +Ford Trucks did. Talk to them.
The phrase "Buy American," is shorthand for, "Economics gives me feelings of inadequacy, latent jingoism and rage." Also, "+Buy American"  is one of the most accurate marketing phrases ever created. It says, "We could work harder and make better things, or we could just make people feel unpatriotic for not giving us their money."

It's the capitalist's dodge that demands a free market only when there is no risk to them and government protection in all other cases. Seeing one of the phrases I hate the most on one of the vehicles I hate the most brought out my snark Hulk.
We never get tired of the price we pay for killing facts. We just invent more facts. It's almost like printing more money to solve an economic problem. It can work a little for awhile, but eventually, your currency is devalued beyond short term repair.

For example, Did you know, the laminant used on "Just Ask, Is it Made In America?" is too environmentally dangerous to be made in America? The chemical adhesives are made in China. The letters likely are as well, but we'll let that go. Because what is made in America is a culture of self-deception and platitude worship unmatched in human history. What's horrifying is the accident of it all. America is only particularly ignorant because it has the most to lose at a time where communication and access to facts are freer than ever. Our culture of the pretense of equality has put facts of the matter and opinions on the same playing field just in time for them to be distinguished with relative ease.
With this in mind, I was hoping against hope that LEER was a foreign-owned company. I found it was, in face American founded and owned. But I did discover something even better: LEER either hates its customers, or at least has an immeasurable contempt for them.
The following is a direct quote from the company history page:


He landed on the word "LEER," liking the positive connotations it borrowed from Shakespeare's King Lear...

The "he" in question was John Collins, LEER's founder.
Not everyone has read King Lear, which is fine. There's no need to be snobby about it. Similarly not everyone is the father of three daughters, as I was when I first read King Lear. (But if you've read it, you see where this is going.)
Briefly, King Lear is about an old man who pits his daughters against one another and betrays the daughter who loves him the most. He sees all of his daughters die, one by one. It's a tragedy about jealousy and vanity and the folly of power that won't listen to reason or recognize facts for emotional or political prejudices. There are no positive connotations. At all. Except that, Like Lear, LEER is perfectly content to make their be positive connotations by saying there are.
Mission accomplished. King Lear is now a role model as long as you don't let the facts of the story get in the way.
Why align a product bought ostensibly by men with the most tragic father figure in the history of literature? I have several theories, but they all point to an utter disrespect for the consumer.
Theory #1: Collins believed people who buy truck caps haven't read King Lear and are too embarrassed to admit it.
Theory #2: Collins believed people who buy truck caps don't have library cards.
Theory #3: Collins has no friends and bad advisors so no one involved with LEER had the courage to tell the owner he was making an ass of himself. I like this theory best because, as Collins himself might say, of the "positive connotations" it has with the play. I amuse myself with the image of an aging Collins slumped behind a huge mahogany desk. Behind him, industrial lighting illuminates the wasteland that is the Elkhart, Indiana business park, three day's stubble glistening with sweat and grime upon his face and a Caterpillar hat upon his head. He waits in vain for someone, anyone, to prove their devotion to the company, to the brand, to him, Dammit!, by pointing out the continued folly of aligning himself with one of the most petty kings in all literature.